This 12-day lodge safari is for travellers wanting to experience both Tanzania and Kenya. You will start and end your trip in Arusha and in Tanzania you will visit the Tarangire National Park, the Ngorongoro Crater, the grassy plains of the Serengeti and Lake Victoria. Then after crossing the border into Kenya you will see the Masai Mara, the flamingos of Lake Nakuru and the swamps of Amboseli National Park. 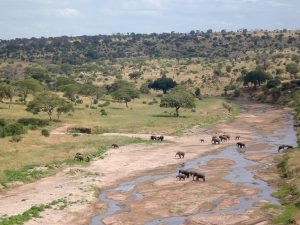 After a short briefing at your hotel, you will travel to the nearby Tarangire National Park, named after the Tarangire River that flows through the park. The park is one of the most attractive and diverse nature preserves on the northern circuit. Scattered throughout the park you will find a large number of baobab trees for which the park is well known for. The river is usually the best location to not only spot the large elephant herds, but also various other wildlife such as giraffes, antelopes, gazelles, zebras and buffaloes. The park also boasts around 550 species of bird and bird enthusiast will easily be able to capture them on film. After an extensive game drive, you will leave the park in the late afternoon and head to the Lake Burunge Tented Camp, where you will spend the night.
Lunch; Dinner 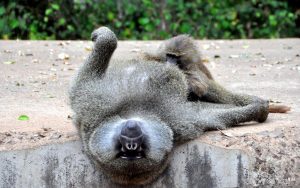 After breakfast you will leave the Tarangire Area and head to Makuyuni where you stop to visit a traditional Masai village. From here you will continue to the town of Mto wa Mbu. Over centuries this fertile area has attracted many different tribes and this diversity can be seen everywhere. For lunch you will be treated to traditional African food, served by the local woman. In the early afternoon you will continue to the African Rift Valley while travelling on good roads. You will stop for photos of the wonderful views over the Masai Plains and the Lake Manyara below. After your arrival at the Endoro Lodge there might be time for an optional walk in the coffee plantations to learn more about the production of coffee.
Breakfast; Lunch; Dinner 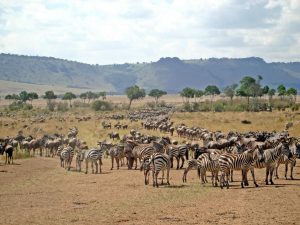 You will have breakfast at dawn and see the sunrise over the crater before travelling down the steep trail into the crater below. Here, inside the world’s biggest caldera, you will see a diversity of wildlife ranging from zebras, gnus, Grant’s and Thomson’s gazelles to lions, leopards, elephants and mountain reedbucks in the forests on the slopes. The crater is also one of the best places to see the magnificent but endangered black rhino. You will have lunch at a picnic spot before you exit the crater in the early afternoon and travel to the open plains of the Serengeti. The Serengeti is the most famous park in Tanzania and it is here where the biggest animal migration in the world takes place. Herds of wildebeests and zebras cross the border between Tanzania and Kenya in search of fresh grass and water, with predators waiting patiently in the shadows. You will spend the night at the Kati Kati Tented Camp in the central Serengeti.
Breakfast; Lunch; Dinner 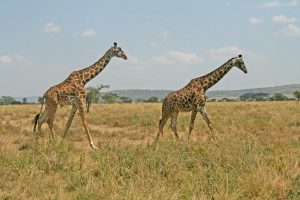 You will set off on an early morning game drive while enjoying the warming rays of the sun. Adventurous guests may choose to experience the Serengeti from the air and join a hot-air balloon ride followed by a champagne breakfast in the bush. This activity is not included in the tour price and needs to be booked in advance. After a hearty breakfast at your camp, you will continue exploring the Serengeti National Park in search of animals you might have missed the day before. The Serengeti is also home to the “Big Five” – lion, elephant, buffalo, rhino and leopard and today you might be able to tick off all the members of this group. A stop at the visitor centre is also possible for interested parties. In the afternoon you will enjoy another game drive before returning to the Kati Kati Tented Camp for dinner and overnight.
Breakfast; Lunch; Dinner

After an early breakfast, you will start the journey to Lake Victoria, the largest lake in Africa and the second largest freshwater lake in the world. The region around Lake Victoria is one of the most densely populated in Africa, with several million people living on its shores. Due to its somewhat remote location, away from the tourist hot spots, the area offers a different side of Tanzania. You will be able to experience the lives of the local people – see the fisherman at work or the children playing in the school’s playground. The night will be spent at the Speke Bay Lodge.
Breakfast; Lunch; Dinner 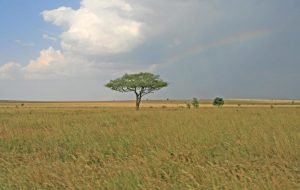 Lake Victoria boasts one of the largest fishing industries in Africa and fish has become a staple in the diets of the local population. You will join a canoe trip on Lake Victoria and see the local fisherman at work. You will see how the locals catch fish the traditional way and admire the previous night’s catch, before embarking on the longest section of your safari – the journey to the Masai Mara. Arriving at the border you will bid farewell to your Tanzanian safari team and start your Kenyan adventure with a new vehicle and new team. You will overnight in luxury tents at the Mara West Camp on the outskirts of the Masai Mara Game Reserve.
Breakfast; Lunch; Dinner 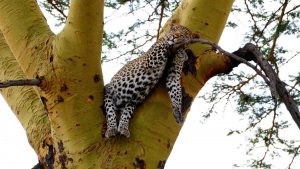 The following days are set aside for game drives in the Masai Mara with your experienced guide. You will take a trip to the Mara River, the greatest hurdle for the wildebeests and zebras due to the number of crocodiles patiently lurking below the surface. The end of October and the beginning of November is one of the best times to catch thousands of animals crossing these dangerous waters, a fascinating but often gruesome sight to behold. In the Masai Mara further predators await their arrival, such as lions, of which the Mara is reputed to have the highest population of all reserves in Africa. The Masai Mara offers spectacular game viewing throughout the year and sightings are not solely dependent on the migration or seasons. You will spend two nights at the Ashnil Mara Camp inside the Masai Mara Game Reserve.
Breakfast; Lunch; Dinner 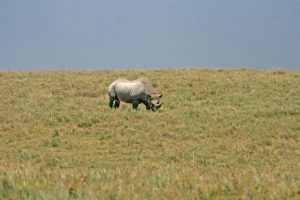 After a relaxing breakfast you will leave the game reserve and journey to the Lake Nakuru National Park, which you will reach by early afternoon. The park, with its algae-rich alkaline lake, attracts in season thousands of flamingos, engulfing the lake in a hue of pink. In addition to its well over 450 species of bird, the park is also home to Rothschild giraffes, zebras, waterbucks, baboons and buffaloes. The park hosts one of the largest concentrations of black rhino and has been fenced to protect the endangered giraffes and rhinoceros populations. You will spend the night at the Flamingo Hill Camp.
Breakfast; Lunch; Dinner

Today you will leave the peace of the lake to return to civilisation and the bustling capital of Nairobi. Reaching the city in the early afternoon, there will be time to explore this frenzied city of people, traffic, markets and colours. Take a taxi to see the Karen Blixen museum, Uhuru gardens, the national museum or the live snake centre next door. You will stay at the Silver Springs Hotel and dinner tonight is for your own account. Breakfast; Lunch 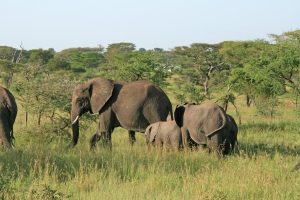 Leaving the busy city, your journey takes you to the Amboseli National Park close to the Tanzanian border. This park is famous for iconic images of elephant herds on the plains with snow-capped Mount Kilimanjaro in the background. We hope for good weather so you can see this scene for yourself. Apart from herds of elephants you might also see lions, leopards and the rest of the “Big Five”. Looking out from Observation Hill, you will see buffaloes, hippos and water birds frolicking in the swamps below. Tonight you will stay at the Ol Tukai Lodgewith its lovely carvings and African art. Breakfast; Lunch; Dinner

Today you will continue through the park on your way to the Tanzanian border. There will be time to see more animals on your way out of Amboseli. After going through customs you are back in Tanzania and you will continue to Arusha where you started your safari. You will be taken to a hotel or to the airport depending on the rest of your holiday program.
Breakfast; Lunch